Engineering Alumna Does it All 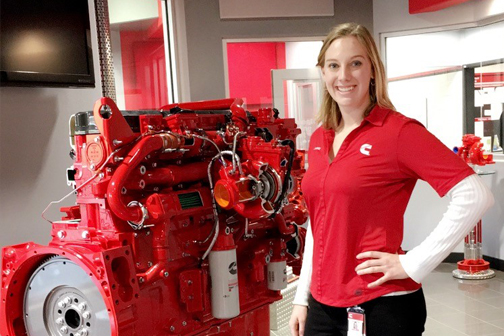 UNT College of Engineering alumna Lindsey Smith knows how to set a goal and attain it.

A self-defined overachiever, she graduated high school at only 17, and decided to pursue two degrees – one in mechanical and energy engineering at UNT and another in mathematics at Texas Woman’s University (TWU) through the dual-degree program.

“I am hands down into anything I can do, touch or be involved in, so mechanical engineering was a perfect fit for me,” said Smith, who graduated from UNT’s Department of Mechanical and Energy Engineering in May 2017.

The program, which is the only one of its kind, was good for her in that it both challenged her academically and helped her branch out of her comfort zone.

“That’s the thing about this campus: it’s very welcoming, and we have faculty who are approachable,” said Smith. “I felt like I could really ask the professors questions about any subject we were studying and get real life applications to relate it back to.”

In addition to her studies, Smith also led a rather active social calendar. From the American Society of Mechanical Engineers (ASME) to the Society of Women Engineers (SWE), Smith was always on the go, looking for new ways to make an impact on the field in addition to furthering her career goals.

She even found time for archery, which is now a hobby at this time for her. She went on to compete in the World Field Archery Competition for Team USA and placed 10th during 2014 as a sophomore in college.

“I’m always working towards a goal, whether it’s something that will help me personally, academically, or professionally, I want it to be something that really matters to make me into a diverse person,” she said.

And it’s that same practicality that led this engineer to re-think the traditional senior design project – a graduation requirement for all UNT College of Engineering undergraduates.

“I wanted to do something different, and I thought it’d be really neat to build a rocket, because it was something I’d never done,” she said. “I didn’t want to just do something normal; I wanted to go big or go home.”

Smith, along with three other students, banded together and entered into the NASA’s Student Launch rocket competition in April 2017. The competition brought schools across from across the nation, who each designed and built their own rocket, to the Marshall Space Flight Center in Huntsville, Alabama.

“It was such an educational packed experience,” said Smith. “We learned most of the fundamentals from our classes, and then we were given the opportunity to put that into action by creating a rocket and then launching it at the Marshall Space Flight Center.”

It was this experience, coupled with Smith’s three internships at GE Transportation, Bell Helicopter, and Lennox International, that she says were eye-opening experiences that taught her more about herself.

At GE, Smith worked as a supply chain manufacturing engineering intern where she worked with production kitting. At Bell Helicopter, she interned in the Engineering Technology and Innovation department where she worked on tail rotor blade sensors for autonomous vehicles in the Air Vehicle Design Department. And, at Lennox International, Smith developed her project management skills in addition to completing her Six Sigma Green Belt in technical support.

“Through each of my internships, I really gained an understanding of what I liked and didn’t like and what I’d want to do as an engineer,” she said. “I was able to test the waters in each of my internships and gain practical experience that would increase my chances of getting a job after I graduated.”

Now, in a rotational leadership role as a manufacturing development program engineer at Cummins Inc., Smith is tackling her career with the same tenacity she had during college.

“I love my current position, because it allows me to learn about the company as a whole and not become too specific in a certain engineering function just yet,” said Smith. “Most of my time is spent working on projects for different business units that vary from turbos, distribution centers and engine build centers to power generators or filtration systems. In addition to this, I am able to tour all of the U.S. locations and receive intensive training.”

And she’s even thinking of joining the National Guard.

“It’s my dream to serve my country, and this is a way that I can do so without affecting my job as a manufacturing engineer,” she said.

Smith plans to pursue her Master’s in Business Administration after she completes her Leadership Development Program and rotates into another full-time position at Cummins Inc.